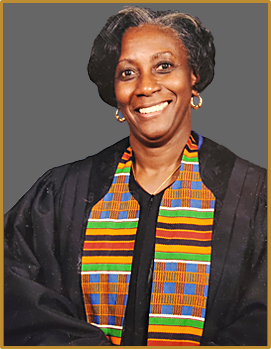 Rev. Dr. Cynthia D. Jackson was born and raised in Jersey City to Fred and the late Georgia Jackson. She is a product of the Jersey City Public School System. She graduated from Lincoln High School and earned a Bachelor’s of Science Degree in Criminal Justice from Jersey City State College. After completing college, she moved to Washington, D.C. and attended the District of Columbia School of Law.

In December of 1993 the law firm of Cynthia D. Jackson, Esquire and Associates was established. Cynthia also had the distinction of serving as the first Black Female President of the Hudson County Bar Association. In April 1998 Cynthia was appointed as a Municipal Court Judge of the Jersey City Municipal Court and since that date has served as a part-time judge, full-time judge, and Chief Judge of that Court. Cynthia currently serves as a full-time judge.

In addition to being a full-time judge, Cynthia has earned a Masters of Divinity Degree from Payne Theological Seminary in Dayton, Ohio. In 2004, Cynthia became the first female to be ordained in the history of Mt. Pisgah AME Church in Jersey City, New Jersey. In 2010, at the New Jersey Annual Conference, she has ordained an Itinerant Elder.

She is also the proud mother of two children, Maisha and Jay, and grandmother of one, Arianna. Maisha is currently self-employed in Venice, Florida. Jay is currently employed as a Licensed Funeral Director at Whigham Funeral Home in Newark, New Jersey.

In April 2012, Rev. Jackson was appointed to the pastorate of Allen AME Church located at 56 19th Avenue, Newark, New Jersey. She is also the immediate past President of the Newark District Minister’s Fellowship and sits on the Executive Board of the Association of Christian Evangelists.

In August 2017 she successfully defended her thesis entitled “Bloom where you are planted: Transforming your community one block at a time.” She graduated in December 2017 with a Doctor of Ministry Degree from the United Theological Seminary in Dayton, Ohio.